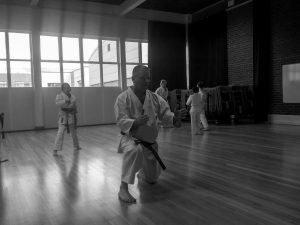 Sensei Andy started his training in 1977 when he was 10 years old after one of his friends told him about the local karate club being run by Sensei Paddy Connolly in Selsey Bill. Andy started to grade in that same year with Sensei Tomita of the KUGB and went on to take his black belt in 1984 with SEKU, Andy has achieved the grade of 5th Dan black belt.

Sensei Andy’s mum Evelyn Gibb was encouraged by Paddy Connolly to start training as well instead of sitting watching her son, Evelyn went on to become a 7th Dan black belt with numerous accolades to her name. Andy’s dad Keith started training much later in1978 and went on to achieve his 2nd Dan black belt in 1990.  In 1985 the family started their own karate clubs in Chichester, Arundel and Westergate and had many years of teaching all levels of students, taking absolute beginners (including juniors) right through to their black belts.

Andy was involved in a serious motorbike accident and had to stop training for nearly 9 years.  In 2015 his step son wanted to start a martial art. Knowing Andy’s history, he asked if he would take him to a club, coincidently his step son was aged 10 the same age that Andy started. They found a local club to attend and once Andy entered the Dojo he found it extremely hard not to join in. He spoke to the instructor relating to his injuries, limitations and his background of karate. The instructor asked him to bring his Gi along next time and join in slowly.

After a time Andy was asked if he would like to teach with some lessons and this was the starting point to him wanting to run his own karate club.  Late 2016 Andy started Eastleigh Karate Club which is now affiliated to Rengokai Karate Organisation.

Andy is an enthusiastic Instructor and student with the drive and encouragement to assist  the development of students regardless of their grade (rank), physical limitations, gender or experience.  Andy has studied karate for many years and his knowledge of Shotokan Karate  has assisted many students during their karate journey