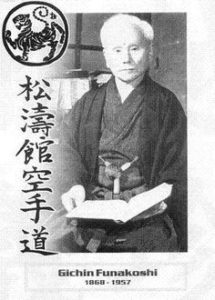 What Does “Shotokan” Mean?

Master Gichin Funakoshi, the founder of our system of martial arts, was a scholar and writer who used the pen name “Shoto.”

When Funakoshi was a young man, he enjoyed walking in solitude among the pine trees which surrounded his home town of Shuri. After a long day teaching in the local school, and then several more hours of strenuous karate practice, he would often walk up Mt. Torao and meditate among the pine trees, under the stars and bright moon.

Mt. Torao is a very narrow, heavily wooded mountain and, when viewed from a distance, the road going up the mountain resembles a tiger’s tail. In fact, the name “Torao” means “Tiger’s Tail.”

In later life, Funakoshi explained that the cool breeze which blew among the pines on Mt. Torao made the trees whisper like waves breaking on the shore. Because he gained his greatest inspirations while walking among the gently blowing pine trees, he chose the pen name of “Shoto,” or “Pine Waves.”

During the late 1930’s, Funakoshi’s students built a rather large Dojo for their teacher. Over the front door, one of them mounted a wooden plaque that said “Shotokan.” In Japanese, the word “Kan” means house or building, so “Shotokan” is literally “Shoto’s House,” or “Shoto’s Place” (or basically, the Funakoshi Building).

Funakoshi’s students never referred to the karate that they practiced as “Shotokan”. Instead, they only used the word “Karate” or “Karate-Do” to refer to their art. It was Japanese people outside of Funakoshi’s circle who referred to his system as Shotokan.

Since other instructors were naming their styles of karate things like Shito-Ryu, Wado-Ryu, or Goju-Ryu, it must have seemed strange that the other major style was just “Karate,” so they started referring to it as “Shotokan Karate”. This basically amounts to “The karate they do in the Shotokan.” This came to represent Funakoshi’s system of martial arts as we practice it.

Today, people who practice Shotokan in the West typically refer to it by that name, but the Japanese Shotokan practitioners usually do not use the word, and instead call it merely Karate even today.